The Friends and Family show made the news today. The London Evening Standard used up all of page three to tell a story involving Tracey Emin's bronze sculpture which is one of many exhibits on show at the Rove gallery until April the 15th. http://www.thisislondon.co.uk/standard/article-24039216-breakdancer-party-girl-sends-emin-art-flying.do 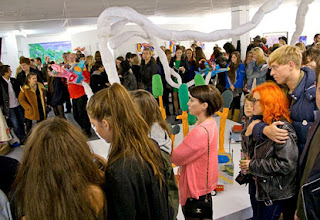 (In this photo above you can just about spot Harry in a red shirt he bought from Primark.
While Hazza was "working the room"  upstairs, Joffers was manning the ever popular 99p art shop. In this photo you can see him standing behind a happy shopper who has just snapped up 2 old 7 inch singles with brand new designer sleeves. 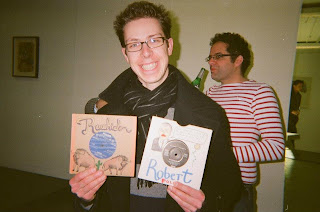 Various celebs were at the bash including Rolling Stone Bill Wyman: 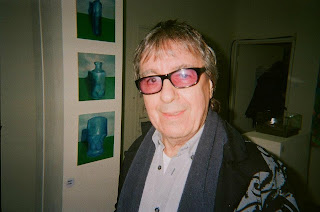 (Above: "Je suis un pop star." says Bill whose daughters featured in the exhibition.)
(Below: An excited Joffe & Pye fan shows off a lock of Harry Pye hair she's bought for just 99p) 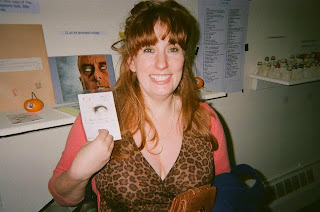 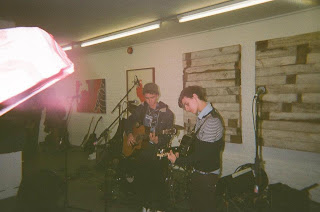 The price for the Emin sculpture is believed to be about £10,000 . The point of J&H's contribution is that everyone can be a collector even if they are down to their last £1. 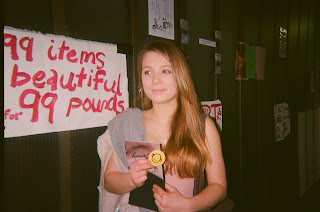 (Above: A young collector with a 99p Harry Pye badge.)
There aren't many left but if you're lucky you may still be able to purchase a J&H 99p mono print which was inspired by Tracey Emin. Beauty is in the eye of the beholder - some will say Joffe and Pye's prints are better than the real thing. 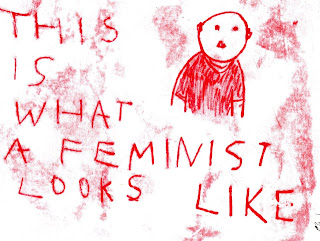 Please note: Although some of the individual 99 items have now sold out all though it's still possible to buy a £99 limited edition box that features one example of each product.
Posted by Joffe et Pye at 13:52